End of an Era

The U.S. housing secretary will resign Monday morning under pressure after accusations of improper allocation of federal contracts, the Wall Street Journal reported in its Monday edition.

Jackson has faced calls for his resignation after lawmakers have said he behaved improperly in awarding federal contracts.

I know, I know. As is usually the case with Republican HUD secretaries your first question...often that of the President's themselves is...WHO? 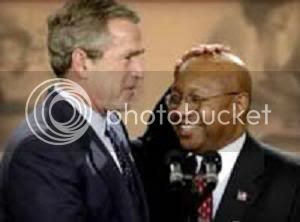