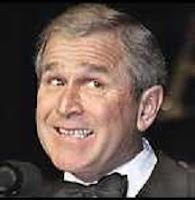 Who needs Flowers & Sweets (or $3 Trillion)?

Police said Wednesday 17 border guards have been shot dead by gunmen in different areas in the southern Iraqi city of Basra.

The sources did not say whether the killings were carried out by the same gunmen and what the motive behind them was.

Criminal gangs and militias loyal to rival political powers have been active in Shiite-dominated Basra, 550 kilometres south of Baghdad.

In a separate incident in the city, Sheikh Abdel-Azim al-Idani, a close aide of senior Shiite cleric Grand Ayatollah Ali al-Sistani, was critically wounded in an attack by gunmen Tuesday, according to the same the sources.

Al-Idani's aide was killed in the attack.

But hey, those Black Preachers sure are crazy (when you edit their clips down into 2 minute segments).

"We have to keep fighting or the scary brown men will join with the scary black men and ruin all that is right about America, the most free & equal society on earth!"
- Paraphrased Sean Hannity
Posted by Attaturk at 8:38 AM