"My friends, it's all about me" 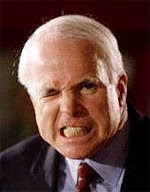 Republican presidential candidate John McCain said on Friday he fears that al Qaeda or another extremist group might attempt spectacular attacks in Iraq to try to tilt the U.S. election against him.

1. If FoxNoise has taught us anything, terrorists statements and actions are always "good news for Republicans".

2. And most importantly, I guess I'd be more worried about the FUCKING VICTIMS OF AN ATTACK then I would about my chances in the election.

But then, I'm not a delusional self-centered asshole...well a lesser one...like John McCain.
Posted by Attaturk at 12:06 PM