Everybody but they anticipated 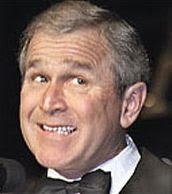 An assault by thousands of Iraqi soldiers and police officers to regain control of the southern port city of Basra stalled Wednesday as Shiite militiamen in the Mahdi Army fought daylong hit-and-run battles and refused to withdraw from the neighborhoods that form their base of power there.

American officials have presented the Iraqi Army’s attempts to secure the port city as an example of its ability to carry out a major operation against the insurgency on its own. A failure there would be a serious embarrassment for the Iraqi government and for the army, as well as for American forces eager to demonstrate that the Iraqi units they have trained can fight effectively on their own.

Now, I fully anticipate from the distance of an entire hemisphere that somehow this operation will be called a smashing success. The full ramifications of the operation (this is Bush we're talking about so it will be a fully BAD ramification) will be known ONLY after Iraqi Jesus, General Petraeus, testifies before Congress. One way or another it will be claimed as treason to question him in any form that makes George Bush look ineffective or deceitful.

That sort of stuff is only useful for Democratic Primaries.

After all, after proclaiming reduced violence actually reflecting stalemate as victory, Bush and the Pentagon portrayed the actions in Basra as a "VICTORY" for the surge already yesterday.

So for those of you following at home:

Iraq, a quality return on investment.

But wait, that's not all...NOW HOW MUCH WOULD YOU PAY?

A Basra newspaper editor who asked that his name not be used for fear of reprisals said most residents despised the Mahdi Army and welcomed the assault. But he said it was obvious that the central government had not consulted with local commanders in planning the assault, citing the inability of the armored vehicles to fit through city streets. But support for the assault already seems to be eroding in several neighborhoods, as militiamen retained control of their strongholds and residents were confined in their homes. “The Mahdi Army is still controlling most of these places,” the editor said. “The result is negative.”

Local residents said the southern sections of Basra, mostly poor and heavily populated, were still controlled by the Mahdi Army on Wednesday night. One Mahdi commander bragged by telephone that after Iraqi armored vehicles failed to gain access to his neighborhood, the Army units fled and his fighters spray-painted Koranic slogans on the vehicles. The claim could not be independently verified.

Both Mahdi and Iraqi Army officers agreed that some of the heaviest fighting took place in the western Basra neighborhood of Hayaniya, where fighters attacked the Iraqi forces and then retreated into the neighborhood.

Col. Abbas al-Tamimi, media officer for the 14th Iraqi Army Division operating in the city, said he expected the fighting to escalate. “The gunmen have heavier and more sophisticated weapons than we have,” he said.

Oh, I'm sure it will all work out well in the end.

Quel dommage!
Posted by Attaturk at 4:05 AM