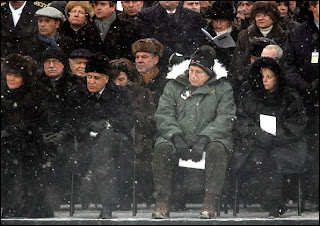 So let me get this straight.

Invading countries, just because we can; secret meeting with oil companies to divvy up that same country's oil; having one's own personal hidey-hole and man-sized safes; authorizing torture and hell, enjoying it; outing a covert agent; having no problem with perjury; telling a Senator to go 'fuck himself'; sleeping on the job; wearing a green parka and snow boots to a Holocaust memorial service; and shooting your friend in the face are all signs of "strength" and what this country is all about to most Americans.

Cheney says that when the President bows to a foreign leader, "our friends and allies don't expect it and our adversaries perceive it as a sign of weakness."

"I think it's fundamentally harmful and it shows in my mind that this is a guy, a president, who would bow, for example, who doesn't fully understand or have the same perception of the U.S. role in the world that I think most Americans have," he says.

I think we all have this straight now. When it comes to being a DICK, Cheney bows to no one.
Posted by Attaturk at 3:33 AM