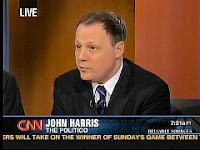 David Broder may be off this week (literally rather than figuratively) but that doesn't mean the Village doesn't have more than enough suitable replacements.

I give you former WaPo retread and Politico hack John F. Harris, desperate for some of Chuck Todd's goateed affections.

See John F. Harris listen to conservatives complain about Froomkin and act in their interest, while having no issues with liberal complaints over Krauthammer, Samuelson, Robert Kagan, Fred Hiatt, ah, hell most all of the WaPo editorial page.