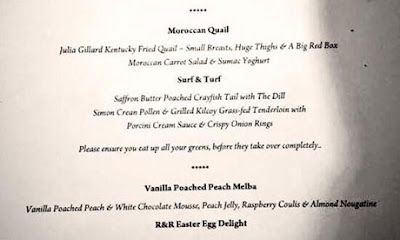 It should be said that Australia at least has HAD a female Prime Minister, but this bit of offensive behavior sadly would be comfortable (and will be found) in a Republican Party dinner reference to Hillary ("Iron My Shirt!") Clinton in the next three years...repeatedly.


A Liberal National Party fundraiser menu which served up Julia Gillard quail with “small breasts, huge thighs and a big red box” has been labelled tacky and scatological by the opposition leader. Shadow treasurer Joe Hockey was the guest of honour at the fundraiser which was held in Brisbane in March for LNP candidate Mal Brough who has apologised for the menu and admitted it was sexist, according to the ABC. A spokesman for the Queensland LNP has since said Brough will not be speaking again on the issue on Wednesday.

My feeble understanding of Australian politics is that the "Liberal National Party" are actually liberal like North Korea is really the "Democratic Republic of Korea".

I look forward to the future Gillard fund-raiser featuring the "Mal Brough Cocktail Weiner, Small, Pink, Insignificant, fashioned out of Pig Snout and hasn't been seen by owner in several decades".

BTW, Joe Hockey? It's Australia shouldn't that be "Joe Australian Rules Football" or "Joe Ashes" or something more patriotic? I at least hope his middle name is "Field".


...feel free to add your own rim-shot to that quality joke.
Posted by Attaturk at 4:47 AM

his original family name is Hokeidonian. he was born in isreal. he's an immigrant married to an investment banker. he's also a bit of a troll and xenophobe, which i find interesting.

funny thing, just this morning my wife and i were wondering what the heck was up with julia gillard's sudden launch of anti-sexism rhetoric, when it seemed like it was a non-starter for most australians, but then, now that we have had time to look round a bit more... and now this...

Conservatives. They are the same everywhere.

So, over here in Oz we have "big L" Liberals, and "little l" liberals. For "L"iberal, read conservative, rightwing, wingnut or any similar epithet; "l"iberal is what you most likely are if your possess intelligence+conscience+education. Mix them up, and you offend both...