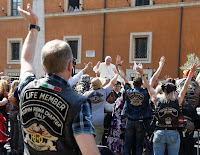 The Putin/Super Bowl ring isn't even the most ridiculous story of the weekend...


Pope Francis blessed thousands of Harley-Davidsons and their riders celebrating the manufacturer's 110th anniversary with a loud parade and plenty of leather.

Thundering Harley engines nearly drowned out the Latin recitation of the "Our Father" prayer that accompanied Francis as he greeted the crowd before Mass. Standing in his open-top jeep, Francis drove up the main boulevard leading to St. Peter's Square, blessing the thousands of people in what was a giant Harley parking lot.

Bike blessings are among the most popular and well-attended group rides or "runs" for bikers. Hell with every "cager" out there seeming to target you and your bike for extinction, even non-believers figure that they can use all the blessings they can get. I've attended a few that combine the blessings (often with many denoninations of clergy on tall platform ladders or cherry-pickers, so you can get in the line of your choice for the blessing) with food, music and "accessiories/parts" festivals. They are generally entertaining events, even for non-believers.

Who is the patron saint of the road rash?

funny that the 85th seemed bigger than the 100th. august is gonna be loud in milw.