Just a meaningless set of new statistics -- another day in America! 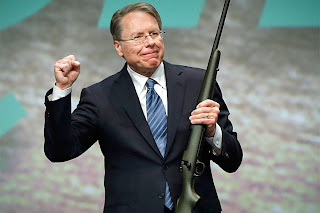 The Founders blessed us with an Amendment we can only read half of:

A 10-year-old boy died Tuesday in San Diego after he and his friend were playing with a gun, NBC 7 reported.

Police said the boy and a 9-year-old girl were playing with a 9 mm semi-automatic handgun when he was shot in the chest.


Blood nourishes the tree of Liberty:

Las Vegas police said a teenager died in a local hospital after being shot Tuesday afternoon at a home, according to TV station KVVU.

Metro police spokesman Sgt. John Sheahan told the Las Vegas Sun that the shooting involved two 13-year-olds; KVVU reported that there were three juveniles inside the home when the teen was shot. It's not clear if adults were present at the time of the shooting.

Police said the shooting appeared to be an accident.

A Benton, Louisiana three-year-old was admitted to a hospital Monday after being shot by a .22 rifle, KSLA reports.

Authorities are describing the incident as an accident that happened when the rifle was knocked over by a door after it was bumped by another child.

Trying to keep this short.

In the UK in the 80's and in a pub with my Brit counterparts. Topic came up - guns. A lot of "prove you are "worthy" of owning a gun before you get a permit to have one.

Said police would come to your home before you got the OK and would check gun security, "Where will you lock it up?" If applicant pointed to beautiful cabinetry with a glass front and secured by a door with a key lock - rejected! Had to be a vault-like storage.

Also told that if you ever screw up in your personal life, to the point of acquiring too many parking tickets, police will come and TAKE your guns away. For evar!

I believe there's a website or blog that runs a daily total of gun deaths per day.

That should run every night on the evening news: how many people died from gunshot wounds, accidental or deliberate. Put some photos up of these little kids. This is a fucking national tragedy.

Each owner should be required to have "accident" insurance. Owners in Florida could get a rider for "Thinly disguised Murder."

maybe we need to call guns the anti-penis, anti-womb. they unmake life rather than nurture.

odd how so many of the "anti-women anti-choice" jerks are all about guns and killing off others once those others are actually really alive!