Wouldn't all of us 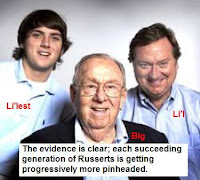 Like to play that insipid "gotcha" game with Russert where we hold up his various platitudinous statements about journalism...

Followed by clips of transcripts of statements of this:

Flashed on the courtroom computer screens were her notes from 2004 about how Cheney could respond to allegations that the Bush administration had played fast and loose with evidence of Iraq's nuclear ambitions. Option 1: "MTP-VP," she wrote, then listed the pros and cons of a vice presidential appearance on the Sunday show. Under "pro," she wrote: "control message."

"I suggested we put the vice president on 'Meet the Press,' which was a tactic we often used," Martin testified. "It's our best format."

But he is, of course, a man of blue collar roots...just let him tell you in a completely inappropriate forum.
Posted by Attaturk at 2:53 AM