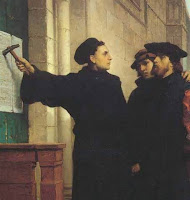 In its latest attempt to keep up with the times the Vatican has married one of its oldest traditions to the world of social media by offering "indulgences" to followers of Pope Francis' tweets.

Laugh at pipio aeternanow, but when you're moaning and groaning in purgatory, you're gonna wish you followed Pope Bergoglio on Twitter.

Stick a fork in it. It's done.

Strangely enough, George Lucas and Woody Allen beat the pope to this some four decades ago.

I like Woody's version better: you get a prize along with your absolution.