Wingnuttia -- is a strange place 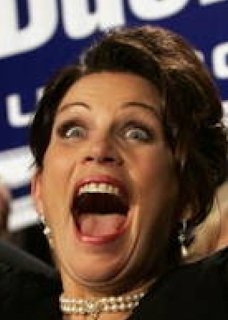 I have to say that "I anticipated this"...well maybe it would be better to say, I hoped something like this would come out.

The series of emails and text messages, made public on the Franklin County Court website in the ongoing lawsuit between Everhart and Strategy Group, add further detail to that meeting, and show the extent to which the company’s managers were worried about Elsass’ psychological and spiritual health. They also reveal potentially embarrassing anecdotes for the company, including one incident in which an executive said Elsass accidentally mailed a “female pleasure machine” to Rep. Michele Bachmann.

I note there was no mention of it being returned.

well, they knew she would need it. accident my ass.

How does one "accidentally" mail something?

Now, yes, someone could mail something in the grip of psychosis, but not just by accident.