Wackjob with a nice smile Mike Huckabee a little over a month ago, decried no one should listen to Michal Moore about health care because...MICHAEL MOORE IS FAT. Which, you have to say, is really original, we'd never heard that line from a conservative about Michael Moore before.

Well, say hello to Rupert Huckabee, I mean, David Huckabee -- a man who makes Jenna Bush seem like a character out of Jane Austen. 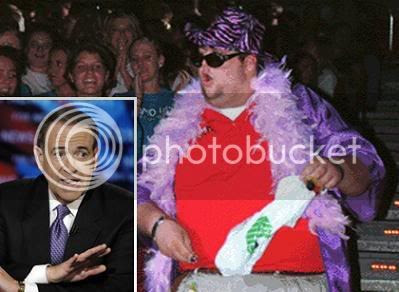 But what about his Glock-packing campaign trail roadblock of a son, David? The li'l Huckster briefly caught the national spotlight in April by getting arrested for trying to carry a loaded handgun through airport security. His father called the situation just "one of those stupid things," but it wasn't the first time the Baptist preacher's son has been an enticing target for bad press.

In 1998, a teenage Huckabee (he's now 26) was fired from his job at a Boy Scout camp for his reported involvement in an incident where a stray dog was brutally killed. While an elected student leader in college, his questionable private business dealings with a student organization created a local controversy that resulted in Huckabee bitterly paying for business licenses with over 6,000 pennies.

I've been following politics off and on, but has there ever been a series of Republican candidates with so many dog issues?

Mitt and his "Wind Tunnel of Shitty Death"; Judith and her "Kill Fido for Finance" and now this? When is Michael Vick announcing?

I really can't believe Frist isn't running just to add some balance with cat killing.
Posted by Attaturk at 9:12 AM