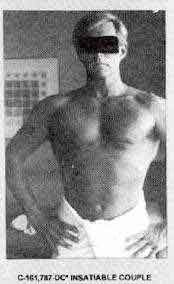 I've been wondering what the hell has been going on with Spitzer since his election. It's pretty clear that Andrew Cuomo hates his guts (and is, IMHO, overreaching at a very early stage in an effort to get Spitzer's job). But it's also clear now (thanks to Digby and The Albany Project) that there are other forces at work. Namely, this prick:

C-161,787-DC* INSATIABLE COUPLE
We are hot, athletic and very fit. We are seeking similar couples or exceptional muscular, well hung, single men. She's 40DD-24-36 and bi. She loves to fuck hard and deep. He's 195 lbs., trim, muscular and 8" +. She prefers jocks, miliary men, and body builders. No fat people or smokers need respond. Send photo and phone. No photo, no response! We are interested in DC, VA, MD, NYC, Miami, and LA.

Please be sure not to miss this, either. (Sea

So Roger Stone is back doing ratfucking ops against Spitzer. Here's the less gentile NY Post account of the insatiable Republican's dirty tricks (and his penchant for swinging -- and ooo00 -- it includes a picture of the gal who "loves to fuck hard and deep.") And here's Josh Marshall on The Whole Sick Crew.

I guess it makes sense that Stone is back to ratfucking. Stone's Wiki bio, which is fairly scrubbed, says he was 19 during his political debut (a/k/a "Watergate"). If we assume that was 1974, that makes him about fifty-two now, kind of long in the tooth to be suiting up with leather chaps and dog collars. Update: turns out ole Roger is 55. And that he gone the way of all Republicans, i.e., resigned two steps ahead of the cops to spend more time with his family. Update to the Update: check it out.
Posted by res ipsa loquitur at 5:50 AM