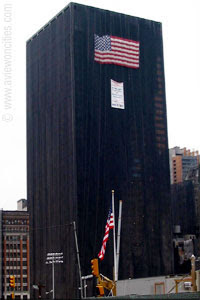 No doubt you heard about the Deutsche Bank Building fire that killed two New York City firemen two Saturdays ago. The fire pissed off a lot of NYers, not only because the whole World Trade Center construction site seems like a giant accident waiting to happen, but also because many of us consider these two firemen two more 9/11 victims. But for 9/11, Deutsche would not have had to be demolished. But for Deutsche's demolishment, no dead fireman.

But the right, never ones to be daunted by more dead bodies (and never waiting a decent interval to pounce), saw Deutsche as an opportunity to exploit yet another tragedy for its own purposes. Daniel Henninger, one of the most mendacious and contemptible right-wing shills out there, penned a Wingnut Street Journal column that blamed "an American system engulfed in proceduralism and legalism" for the Deutsche clusterfuck. Yes, according to Henninger, but for procedures and lawyers, Deutsche would never have happened.
Except that, as usual, Hennigner is full of shit. Today we learn via the NY Post, a paper of which Henninger no doubt approves since it's also owned by his new boss, Mr. Murdoch, that Deutsche might have been prevented if a few more procedures had actually be followed.

The department had said last week it didn’t have a plan in place to fight fire at the former bank tower, which was being dismantled and cleaned of toxic debris floor by floor. It also acknowledged that it had not inspected the building’s standpipe system, which connects fire hoses to its water supply, in over a year, even though it should have done so every 15 days.

The standpipe was broken at the time of the Aug. 18 blaze; inspectors later found pieces of it disconnected in the tower’s basement.

And this doesn't even begin to address the mysterious (and aptly named) John Galt, the shell corporporation of a subcontractor working the Deutsche demolition job.
I read Henninger's column when it first appeared and merely rolled my eyes. Then I saw the Post this morning and wanted to roll the paper up and shove it down Henninger's miserable throat.
Posted by res ipsa loquitur at 1:26 PM