And your little dog too... 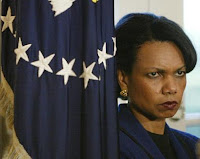 There are great hopes for Hillary at State. I met last week with a number of career State Department employees and was surprised when one said she was looking forward to the “Glinda Party” next week. I asked her: if Hillary was Glinda, the Good Witch of the South from the Wizard of Oz, did that make Condoleezza Rice the Wicked Witch of the West?

“You’re on to it,” she said. Another person pointed out to me that after Rice’s arrival in 2005 the tone of official State Department publications changed; they began to praise and glorify Rice. “No prior secretary,” said the twenty-year veteran, “did anything like this.”

Of course, Condi wasn't alone in self-glorification. Bush's Interior Secretary Dick Kempthorne gave a farewell address to employees that was all about him,

“about 600 slides, each picturing the distinguished secretary, many of them taken at a national park.” One “longtime employee” groaned, “Slide after slide after slide. It was special. That’s all I should say.”

I just hope there wasn't one of him in his quarter-million dollar crapper.

Cults of no personality, the Bush Administration was rife with them.

There were others, of course, Alphonso Jackson of HUD and his multiple displays of self-glorification come to mind.

And, of course, the stuffed-flightsuit moment that encapsulates it all.

But there are others, what comes to mind for you?

[mostly cross-posted at Firedoglake]
Posted by Attaturk at 3:40 AM