Cue up the Liberty Bell March 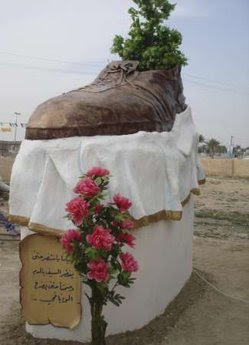 A statue built for Iraqi journalist Muntazer al-Zaidi, who hurled his shoes at former U.S. president George Bush, is seen in Tikrit, 150 km (95 miles) Baghdad, January 27, 2009. An Iraqi town has unveiled a giant monument of a shoe in honour of the journalist who threw his footwear at former U.S. President George W. Bush. The letters on the sign reads "Muntazer is fasting until the sword breaks his fast with blood, silent until our mouths speak the truth". Picture taken January 27, 2009.
REUTERS/Sabah al-Bazee (IRAQ)


"until the sword breaks his fast with blood..." ? Who writes this stuff, a FoxNews mole?