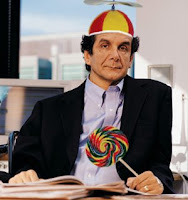 Charles Krauthammer took the Hippocratic Oath. But spelled it wrong. The psychiatrist wrote in September 2006 that we needed to bomb Iran within one year or they'd bomb us. How'd that moral shortcut work out? He's also had a long-time chubby for torture.

So why change? Krauthammer says the "ticking timebomb" scenario exists, and here's the totality of his defense:

On Oct. 9, 1994, Israeli Cpl. Nachshon Waxman was kidnapped by Palestinian terrorists. The Israelis captured the driver of the car. He was interrogated with methods so brutal that they violated Israel's existing 1987 interrogation guidelines, which themselves were revoked in 1999 by the Israeli Supreme Court as unconscionably harsh. The Israeli prime minister who ordered this enhanced interrogation (as we now say) explained without apology: "If we'd been so careful to follow the [1987] Landau Commission [guidelines], we would never have found out where Waxman was being held."

So is Krauthammer forgetting anything? Yeah, the bottom line:

Israeli forces located Wachsman in a West Bank house, which they stormed in an effort to free him, but his captors killed him as the raid began. One Israeli soldier and three kidnappers were also killed.

So the only example Krauthammer can come up with is one that failed. Well, a lot of people died, including the hostage, but I guess as long as there's death, mission (and emission no doubt) accomplished. Furthermore, the torture Krauthammer loves so much is still illegal in Israel, there is no "ticking timebomb" exception. Naturally Krauthammer also ignores the Bush Administration torturing people post-hoc to justify the deaths of thousands of people by coercing false confessions.

[cross-posted at Firedoglake]
Posted by Attaturk at 3:33 AM