They laugh alike, they walk alike, At times they even talk alike 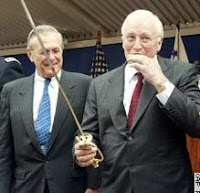 Cheney and Rumsfeld, what a crazy pair.

In addition to the Jack Chick-level proselytizing about invading a Muslim Country, Rummy got his mitts deep into the disaster that was Katrina:

- Two days after Hurricane Katrina made landfall in New Orleans—and the same day that Bush viewed the damage on a flyover from his Crawford, Texas, retreat back to Washington—a White House advance team toured the devastation in an Air Force helicopter. Noticing that their chopper was outfitted with a search-and-rescue lift, one of the advance men said to the pilot, "We’re not taking you away from grabbing people off of rooftops, are we?"

"No, sir," said the pilot. He explained that he was from Florida’s Hurlburt Field Air Force base—roughly 200 miles from New Orleans—which contained an entire fleet of search-and-rescue helicopters. "I’m just here because you’re here," the pilot added. "My whole unit’s sitting back at Hurlburt, wondering why we’re not being used."

This while the Coast Guard was working tirelessly, with limited resources, rescuing people. The military helicopters were not being used because Don Rumsfeld was engaged in a turf war.

Even the tragically clueless George Bush saw the damage to his poll ratings and figured that out.

"Rumsfeld, what the hell is going on there? Are you watching what’s on television? Is that the United States of America or some Third World nation I’m watching? What the hell are you doing?"

[cross-posted at Firedoglake]
Posted by Attaturk at 3:27 AM