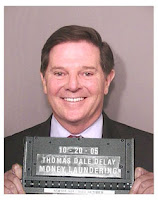 That Tom Delay really mellowing through the years:

Matthews asked, “So you want to get rid of what’s known as Medicare today…[and] replace it with private sector health care?” “Amen brother,” replied DeLay, not realizing that Matthews was asking him a question, not making a statement.

Matthews then asked DeLay whether he is a birther. The former House Majority Leader mistakenly said that he would like to see the President’s “gift certificate” and asked Matthews to personally ask Obama for it. He also compared Obama to “illegal aliens”