What Obama Should Do™ 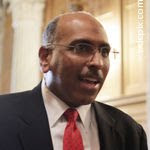 I had one of those annoying What Obama Should Do™ discussions with a friend yesterday. This one in regard to health care reform.

It's too late to do What Obama Should Have Done™, which is to say, had a big prime-time address to a joint session of Congress where he laid out say, three parameters for a health care reform bill he'd be willing to sign (e.g., cover everyone, re-regulate the insurance industry, institute a program to bring medical costs under control) and then let congress go out and draft a bill).

But it's not to late to do What Obama Should Do™, which is to say, challenge a Republican -- any Republican -- to debate him about health care reform live on national prime time TV at some point during the week after Labor Day.

If the Republicans balk they are sniveling chickenshit "Party of No" losers. And if they don't, well, who the hell are they going to send up there? A Bronzed Boehner? Mitch McConnell's Wattle? Mushmouthed Imbecile Eric Cantor? Mittens Romney? Tim Milquetoast Pawlenty? I'd vote for Michael Steele, but what the hell do I know anyway?

There's still time to do What Obama Should Do™, Mister President. And you don't even have to thank me (or, more accurately, my friend) for the idea.
Posted by res ipsa loquitur at 12:45 PM