"Hey hon' do you have any of that freedom mustard?"

When NASCAR stereotypes are fulfilled -- the following is best accompanied by banjo music.

Lisa Mayfield, the stepmother of Jeremy Mayfield and a witness for NASCAR in defending its suspension of the Sprint Cup driver, was arrested Saturday night after an incident at her stepson's Catawba County house.

According to Catawba chief of police Cecil Cook, Lisa Mayfield was charged with public intoxication and had warrants issued for four counts of simple assault and second-degree trespassing...

"According to the officers she was pretty high," Cook said. "The officers took her to jail on public assistance ... to make sure she didn't cause problems to anybody or herself. The Mayfields came up [to the magistrate's office] and took charges out. She was arrested on those charges while in jail."...

Jeremy Mayfield, in response to the court filing, argued that his stepmother's testimony was not trustworthy. He accused her of killing his father, who committed suicide in 2007, according to police reports. He also accused her of accepting money from NASCAR in exchange for her testimony. Lisa Mayfield has filed a civil suit against her stepson for defamation of character.


Ms. Mayfield did issue a statement, however, thanking the "Sears' Craftsman/Slim Jim/Old Grandad Division of the Catawba Sheriff's Office for having her arrest proceed so fast."

Stay tuned...you never know if this case may take an "unexpected" turn...as in to the right. 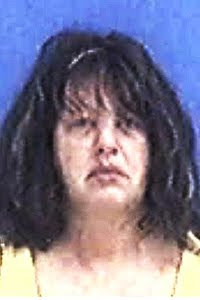 When your booking picture looks like a "last known photograph" it is truly a cry for help.
Posted by Attaturk at 7:39 AM