Another likely Malkin reader jumps on the logic trampoline 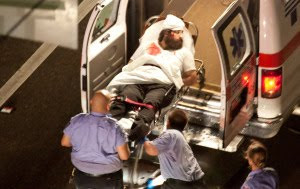 As established earlier, mass killing is permissible ONLY when it involves a White Christian Republican against people who are Muslim -- it's quite a theme were having on the blog today. A very depressing, soul-crushing theme.

And so it continues, Ralph Peters-style:

Alexios Marakis, a Greek Orthodox priest visiting the U.S., got lost in Tampa and tried to stop and ask directions from Marine reservist Jasen D. Bruce. But instead of offering help, “Bruce struck the priest on the head with a tire iron.” The reservist believed Marakis, who spoke limited English, was an Arab terrorist. Bruce chased the priest for three blocks, “and even called 911 to say that an Arabic man tried to rob him.”