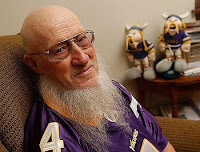 If this doesn't fit into the stoic nordic stereotype of the long-suffering Viking fan I don't know what does:

Emmett Pearson, a farmer who lives in rural Welch, watched the Minnesota Vikings lose the 1974 Super Bowl to the Pittsburgh Steelers and immediately began growing a beard. The 79-year-old hasn't shaved since, and doesn't plan to until the Vikings win the big game — whenever that might be.