Can we fire you now? 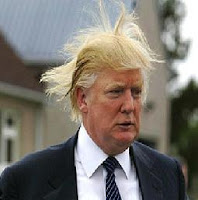 Such are the times that for more than a generation, this individual has been held up in public as Mr. Success. A guy who took his father's already successful business and bloated it up until he gets proclaimed the epitome of business genius. No matter how many times he fails. Yet, he's always around bragging and pontificating somewhere on his awesomeness.

When in reality, Donald Trump is only a few cuts up from being the George W. Bush of business.

Trump Entertainment Resorts Inc, Donald Trump's casino group, is expected to file Tuesday for bankruptcy, The Wall Street Journal reported...Such a filing would mark the third appearance in bankruptcy court for Trump Entertainment, which most recently emerged from bankruptcy proceedings in 2005, the newspaper said.

Three bankruptcy filings including one that recent?

How the hell is that possible?

And, of course, it isn't just his resorts company that has had this problem.

Oh, yes, he's too arrogant to fail. It must be the hair.

[Cross-Posted at Firedoglake]
Posted by Attaturk at 3:33 AM