It isn't snark if it's true 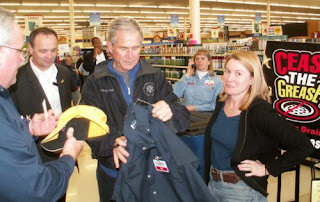 I see a long life of not even being invited to even cut ribbons at supermarkets and casinos:

A jovial former President Bush walked into Elliot's hardware store in Dallas this morning taking customers and employees by surprise...

Elliott's had made the former President a lighthearted offer in a letter and ad in the paper, to come be a greeter at the store. Janet James says, "I guess we knew that wasn't going to happen but."...

The also gave him a blue-jacket and name tag. As the picture reveals though, Bush won't go anywhere without a "Presidential Embossed Jacket".

That jackass is going to demand he be buried in one of those.
Posted by Attaturk at 9:34 AM