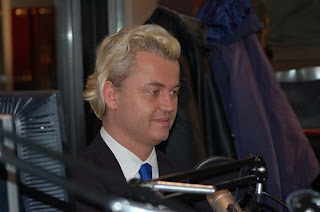 Life's little certitudes. Red Sox fans will mock Alex Rodriguez as "A-Royd"; Lou Dobbs will not be parading on Cinco de Mayo; and conservatives will go into the sewer and praise intolerance and censorship as glorious "free speech".

Meet the new hero of the Right in America. I hope Malkin can get him an appropriately-tasteful placard.

Geert Wilders—who has publicly compared the Koran to "Mein Kampf"—is scheduled to make public appearances in Washington next week, including a Feb. 27 press conference at the National Press Club. Wilders is seeking to promote his movie "Fitna," an incendiary short documentary film that depicts Islam as a religion of terrorists.


The chief sponsor of Wilders's National Press Club event is Frank Gaffney, a former Reagan administration Pentagon official who now runs the Center for Security Policy, a prominent neoconservative think tank. Others who hope to meet with Wilders include David Horowitz, a well-known conservative activist who promotes campaigns to fight Islamic extremism.

Yes, not some Muslims are "terrorists" -- but ALL are. KKKlassy. And what a nice group to hang out with, Frank Gaffney and David Horowitz. Well Geert, I'd say that's Allah's judgment right there and "the judgments of the Lord are true and righteous altogether."

[cross-posted at Firedoglake]
Posted by Attaturk at 3:43 AM