Surely the best reviewed movie since...

It's hard to believe that Paul Ryan's favorite work of fantasy fiction (along with Reagan Erotica and Robert Samuelson -- redundant?) about a person's desire to justify infidelity through stultifying and hackneyed prose does not make for compelling cinema -- though it works well enough for early morning blog posts.

As a Nobel Prize winning economist once said, the best summary of Atlas Shrugged: the Novel is this:

There are two novels that can change a bookish fourteen-year old's life: The Lord of the Rings and Atlas Shrugged. One is a childish fantasy that often engenders a lifelong obsession with its unbelievable heroes, leading to an emotionally stunted, socially crippled adulthood, unable to deal with the real world. The other, of course, involves orcs.

But if you're Rand Paul it can involve both. 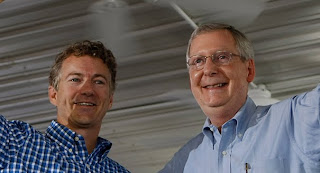 What we can say about Atlas Shrugged: the Movie is that it has been judged even worse than another translation of another stupidly-worshiped book Battlefield Earth. So at least it is a good day for John Travolta.

The Ebert review is a fun read - bonus points for using the phrase "rumpy-pumpy":

Awful is Awful. If you don’t believe it, check your premises.

i take it they were faithfull to the rand scribbles.

... May I endorse another movie ..."The Passion of the Christ"

I'm probably on the fringe here but the novel ,Battlefield Earth, wasn't nearly as terrible as the movie.