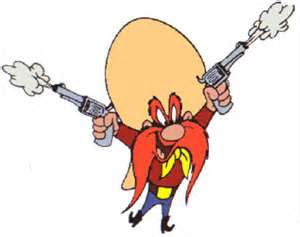 I imagine, if we tried, we could easily have a half-dozen people sit around a table and when the question posed is, "If you could create the perfect stereotype for the new President of the NRA, what would he (because it's gonna be a guy) be like?"

And after about 30 seconds we would probably come up with this:

1.  He would be from the South.
2.  He would be certain that Eric Holder and Hillary Clinton tried to get the U.N. to take guns away.
3.  He would refer to the Civil War as "The War of Northern Agression".
4.  He'd call Obama a "Euro-peen" Socialist (to which I'd respond, "if only!")
5.  He would look like Yosemite Sam.

“Like we say down South: When you got all the pigs squealin’, you know you’re doing something right.”

Like Queen’s Gambit Declined, there’s an obvious response to this. You just call them crazy, unpatriotic jerks 24/7 until they grow up.

I love the fact that he has smoke and flames shooting out of his ass.

His hatred for "all things Obama" must be strong to keep speaking while it seems his ass is on fire...

Well, he said it, not me. No, he's not smart enough to have guns. Or knives. Or any pointy objects, like screwdrivers or pool cues or pencils.

Or, from the looks of it, Louisiana hot sauce.

Hillbilly dipshit. I believe his pants are on fire.

You need a large black (straw) man lurking in the background.

a fine figure of health he is.

Jim Porter: “Like we say down South: When you got all the pigs squealin’ ..."

typical "son of the south" (as opposed to men who just happen to be from the south). unreality is his daily life.

let's face it. We're only months away from a name change to the New Revolution Army. I'd assume that as soon as they can get a Patriot Protection Act passed - anyone sincerely using 2nd Amendment rights in defense against a perceived tyranny is immune from prosecution - we'll be in for a ride.