Two sides of the story

It's been hard to really figure out which side of the James Rosen story to cheer against.   The government's use of police powers possibly chilling the First Amendment or FoxNews never ending ability to be assholes.

But while the media itself has somewhat of an agenda in reporting it, it is also clear that Rosen had an agenda as well: 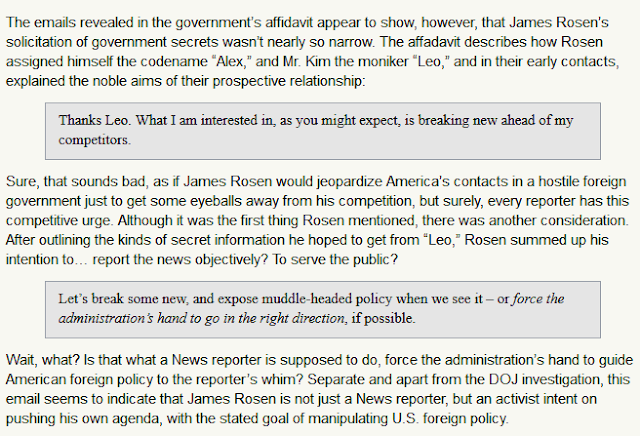 If you'd only trust 17 of the last 23 Attorneys General with a crowbar (and that's being charitable), you'd better not set a precedent for using it.

In the context (North Korea + Fox News), "force the administration's hand to go in the right direction..." can only mean, "let's try to start another war, `cause crazy ol' Roger Ailes wants one."

There's already too much foreign policy by remote control (read: by the military) in this country. Giving the Gameboy to Roger Ailes for his turn will surely blow a bunch of fuses in the foreign policy house.

How is that not treason by the very definition of the word?