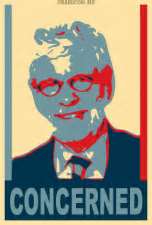 
"The evidence Colin Powell presented to the United Nations — some of it circumstantial, some of it absolutely bone-chilling in its detail — had to prove to anyone that Iraq not only hasn't accounted for its weapons of mass destruction but without a doubt still retains them. Only a fool — or possibly a Frenchman — could conclude otherwise."


In a post-Sept. 11 world, I thought the prudent use of violence could be therapeutic.

Richard Cohen is still paid a great deal of money by the same money-losing entity to dispense foreign policy advice like this:


The Syrian situation is spinning out of control. The longer Obama waits to intervene, the harder it becomes to do so. More than 70,000 people have been killed. More than a million Syrians have become refugees. The suffering is vast and the consequences of inaction are catastrophic. The White House is coldly wrong. Obama didn’t misspeak when he said red line. He misspoke when he later suggested that he didn’t mean it.

Self-proclaimed Washington Post "liberal" columnist Richard Cohen has yet to meet a war he wasn't willing to have some other American fight.

Cohen may have been in Vietnam, but, I suspect he spent most of his time there cowering in a corner and shitting himself.

This sort of warmongering is not just embarrassing, it's stupid, to boot. Cohen knows, like many of the rest of us, that the CIA has been helping the "rebels" on the vague belief that they'll be beholden to us if they take power, and that they'll break ties with the Iranians, which is what this is all about, after all. It's not about oil, for a change--the Syrians will barely have enough for domestic use in just a few years.

Assad may be an asshole, but, he's as much a captive of the military as the Syrian people are, and trying to bust the country wide open via a civil war is just going to create another Afghanistan, or Libya, or Iraq, or Mali. And, for what? Denying Iran an ally of limited capability? Giving the right wing in Israel some opportunity to beat their chests?

I think Obama's shit the bed on this one. He's as much a captive of our military and right wing as Assad is of his.

Cohen is grasping at straws. The US (and Obama) is in a very weak position, and has been. The same Greek Chorus of mighty warriors are taking the stage in a reprise of 'We are all Georgians Now" which it would be refreshing if the MSM would take some column inches to point out. But instead, they are getting played (again!!!!)

I am afraid we are a captive audience of a disastrous third act, set in motion at the outset of unrest in 2011/2012. This report from the Crisis Group http://www.crisisgroup.org/en/regions/middle-east-north-africa/egypt-syria-lebanon/syria/109-popular-protest-in-north-africa-and-the-middle-east-vii-the-syrian-regimes-slow-motion-suicide.aspx
I think correctly lays the blame for this at the feet of the Syrian regime. There was a breif window of opportunity to appeal to reason, now squandered. I understand that the Military in Syria is potentially culpapble in persuading a startled President Assad to revert to brutality. But nothing will come of intervention now. Unless there is a breaktrhough on the geopolitical front (Russia, China, US, EU, Arab League) to disarm the ticking time bomb tht is the current Syria all the remains is to get out of the way.

Can we drop pundits instead of bombs on the Syrian government? Or would that be considered using gas weapons?

But, but, but, those OLD wars are all scuffed up and dirty. They don't work right anymore. What we need is a shiny brand new, fresh out of the box war. You know how a new war looks all sparkly? Like it's winking at you from across the room? Oh, it's just so beautiful!

And, instead of carping about poor folks fighting and dying, can you libruls for once just think of someone else? I mean, how many journalists can fluff their resumes with a "war correspondent" stint at some bar far behind the front lines, filing thrilling dispatches as if they themselves were doing something, I dunno, heroic?

Richard Cohen can't go on forever. We need to develop talent now for that inevitable day.

why do we get maroons?

Someone needs to indulge in the therapy of the prudent beating of Richard Cohen's ass.