I guess the Wurlitzer shall never die:


The Internal Revenue Service, under pressure after admitting it targeted anti-tax Tea Party groups for scrutiny in recent years, also had its eye on at least three Democratic-leaning organizations seeking nonprofit status. One of those groups, Emerge America, saw its tax-exempt status denied, forcing it to disclose its donors and pay some taxes. None of the Republican groups have said their applications were rejected.

But at least there's no passive-aggressive race-baiting going on. 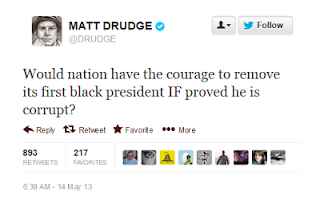 Now on to a bipartisan scandal we can all get behind. As opposed to the bullshit ones.

the WATB party needed more to whine about.

The nation needs the develop the courage to eradicate garbage like Matt Drudge from its public discourse.