Do conservative pundits just extrapolate moronic analogies into scientific arguments all the time?

...actually when don't they?

How dare Al Gore & climatologists make me take serious problems seriously. I'd rather never notice what they are saying at all so I don't have to do jackshit about things! I love the last sentence in particular, because it may be the most inane thing ever written outside of a Jonah Goldberg Column:

But just because something can be plotted on an X and Y axis does not make it the whole truth.

Um, it doesn't exactly make it a lie either Sparky. 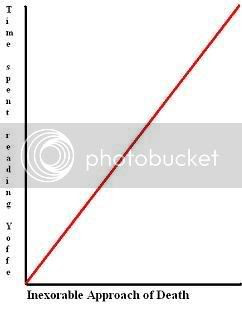 Just who is this Emily Yoffe who writes this whining monstrosity?

Yoffe also co-authored the autobiography of Larry King and appeared on CNN to discuss the physical attractiveness of Presidential candidates in her capacity as a writer for Slate.

Wow, Larry King's muse and the shallowest political analysis ever, who'd have imagined those two things could be shared by one person.

I bow to her expertise.
Posted by Attaturk at 3:39 AM