I'm sure this is what the First Amendment was all about

MATTHEWS: OK, well let's talk about that. I am stunned at these last supper scenes, where the Last Supper in history was all men...

Um, yeah...what can you really say about a guy who just discovered that Christ and the 12-Disciples were purportedly all dudes, that's only been church doctrine for what 20 centuries now? And the way it affects you is that you are "stunned"?

How the hell does one become "stunned" by the all-male last supper? Now the penultimate supper when there were 3 Christs (including a fat one) and 28 disciples a kangaroo and a caberet act, that's different.

...every scene you see with Hillary is a lunch, and it's all women. She is advertising her sisterhood. Is that something she can use to help sell herself as a future strong person defending this country, or does it get in the way?

Damn, these women doing things like getting into photographs, especially when they are requested to come down and pose for a portrait about their support for Hillary. Besides, in Chris Matthews' world apparently, ONLY men surrounded by men are capable of being a strong person and defending the United States. Because women cannot be strong.

As any of you know who have read this blog, I'm not a big Hillary Clinton supporter -- in large part because I find the Bush-Clinton-Bush...Clinton scenario structurally damned depressing. Second, because I think she triangulates the shit out of stuff, just like her husband and will put themselves before Party building...just like her husband.

But Chris Matthews daily acts of misogyny are sickening. Every goddamned day he's whining about "Hillary" (not Senator Clinton, "Hillary") while swooning over how Republicans like Mitt Romney & Fred Thompson smell.

Next to Bill O'Reilly and Glenn Beck, he's the biggest freak show on television. 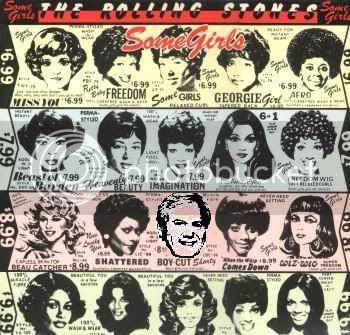 Shouldn't be too subtle, thanks to Taylor Marsh for the Matthews pic.
Posted by Attaturk at 3:58 AM