It's sort of sad

Apparently the National Review cruise to the Arctic is going to end for Bill Buckley the way it did for Henry Hudson.

“Aren’t you embarrassed by the absence of these weapons?” Buckley snaps at Podhoretz. He has just explained that he supported the war reluctantly, because Dick Cheney convinced him that Saddam Hussein had WMD primed to be fired. “No,” Podhoretz replies. “As I say, they were shipped to Syria. During Gulf War One, the entire Iraqi air force was hidden in the deserts in Iran.” He says he is “heartbroken” by this “rise of defeatism on the right.” He adds, apropos of nothing, “There was nobody better than Don Rumsfeld. This defeatist talk only contributes to the impression we are losing, when I think we are winning.”

The audience cheers Podhoretz. The nuanced doubts of Bill Buckley leave them confused. Doesn’t he sound like the liberal media? Later, over dinner, a tablemate from Denver calls Buckley “a coward.” His wife nods and says, “Buckley’s an old man,” tapping her head with her finger to suggest dementia. 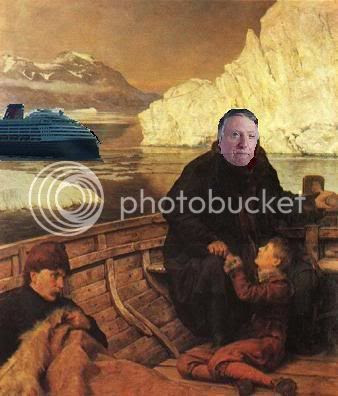 Well, at least they sent Rich Lowry with him.
Posted by Attaturk at 4:19 AM