What have the Kagans been Wrong about Now? 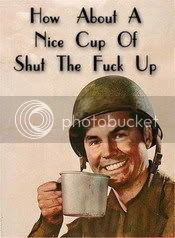 Fred Kagan is leading with his chin again...and considering it has the dimensions of a car's airbag that's probably a good thing:

Sectarian deaths in Baghdad dropped significantly as soon as the new strategy was announced in January, and remain at less than half their former levels. Spectacular attacks rose as al Qaeda conducted a counter-surge of its own, but have recently begun falling again.

BAGHDAD, May 23 -- More than three months into a U.S.-Iraqi security offensive designed to curtail sectarian violence in Baghdad and other parts of Iraq, Health Ministry statistics show that such killings are rising again.

And the recent tail off claimed?

BAGHDAD - Twenty beheaded bodies were discovered Thursday on the banks of the Tigris River southeast of Baghdad, while a parked car bomb killed another 20 people in one of the capital's busy outdoor bus stations, police said.

The beheaded remains were found in the Sunni Muslim village of Um al-Abeed, near the city of Salman Pak, which lies 14 miles southeast of Baghdad.

The bodies — all men aged 20 to 40 years old — had their hands and legs bound, and some of the heads were found next to the bodies, two officers said on condition of anonymity because they were not authorized to release the information.

And then, there is this:

Do the insurgents have the initiative in Iraq or does the U.S. military?

That important question came up at today's House Foreign Affairs Committee hearing which was examining whether the military surge in Iraq was working.

Major Gen. John Batiste (ret.) who commanded the Army's First Infantry Division in Iraq, and is a respected critic of the war, said the insurgents have the initiative since they can pick where and when to explode a truck bomb for instance.

But Frederick Kagan, a scholar at the American Enterprise Institute, rejected that view, saying that under the new strategy being executed by Gen. David Petraeus, the top commander in Iraq, the initiative was on the U.S. military's side.

Kagan also said because of the surge, if U.S. forces were playing whack-a-mole, they were playing it everywhere.

Batiste disagreed with Kagan on this.

It was one of those strange Washington moments where the military expert with real experience as a combatant commander in the battlespace at issue was being told he was wrong by an Inside-the-Beltway expert who likely never fired a weapon at anyone in anger.


*Thanks to reader Gordon for making me remember the poster.
Posted by Attaturk at 6:16 AM