I'm trying. I've been trying all week. The other day, I drove another 30 miles or so on the streets and alleys of Baghdad. I'm looking for the civil war that The New York Times declared. And I just can't find it.

Maybe actually being on the ground in Iraq prevents me from seeing it. Perhaps the view's clearer from Manhattan. It could be that my background as an intelligence officer didn't give me the right skills...

And riding around with the U.S. Army, looking at things first-hand, is certainly a technique to which The New York Times wouldn't stoop in such an hour of crisis...
All day - and it was a long day - we drove through Shia and Sunni neighborhoods. Everywhere, the reception was warm. No violence. None.

I supported this war, but the deteriorating situation is starting to convince me that we can’t win. Those of us who hoped that the Iraqis could achieve democracy were wrong — and their failure has implications for the entire region.

In my years as an intelligence analyst, I consistently made my best calls when I trusted my instincts, and I was less likely to get it right when I heeded the arguments around me. Today, those surrounding arguments damn Iran.

HALLELUJAH! For the first time since Baghdad fell, our military in Iraq has a comprehensive, integrated plan to defeat our enemies. 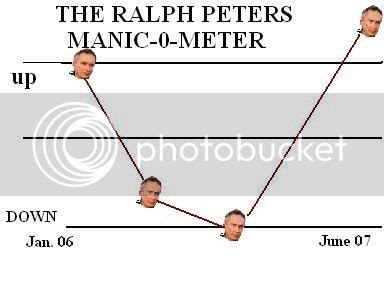 UPDATE: Apparently the Kenosha Kid did something on Peters a couple days ago and if I don't link to it, I'll never effing hear the end of it.
Posted by Attaturk at 7:17 AM