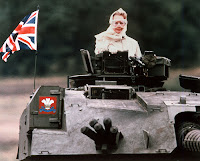 I wondered yesterday what the Pope was going to say.

I'm sure the Vatican was ready with the cutting and the pasting on this one:


Pope Francis on Monday hailed Britain's former prime minister Margaret Thatcher for her "promotion of freedom" and said he was "saddened" by her passing.


The Argentine pope "recalls with appreciation the Christian values which underpinned her commitment to public service and to the promotion of freedom among the family of nations," a condolence note read.

The overwhelming occupants of the Falkland Islands (500,000 of them to less than 3,000 bipeds) did not bah a comment about that whole "promotion of freedom" thing.

Neither did the majority of South African citizens.

(pic via think defence at Flickr.com)
Posted by Attaturk at 3:30 AM

Anything truthful I could say about Thatcher would be regarded as chillingly insensitive and cruel. Just like her.

Looks as if Pope Frankie Fivefingers is looking to kiss the ass of the right-wing Westerners at the expense of most Argentinians. After all, this is the woman who used war against them to shore up her flagging poll numbers, thus creating, as Charlie Pierce says, the shitty little war of distraction.

he did the obama faint praise cover your ass statement.