I'm sure there's nothing fishy going on 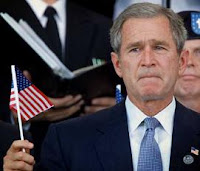 Is it more fitting that Bush's Inspector General on Iraq Reconstruction is being investigated for "Corruption" because he is a Bush Appointee?

Or because of this:

In May, the White House confirmed that Bowen's office, whose revelations of waste and corruption in Iraq have repeatedly embarrassed the Bush administration, was being investigated by the President's Council on Integrity and Efficiency after complaints from former employees. The executive branch organization was created to investigate allegations of misconduct by inspectors general at federal agencies.

At the time, the White House rejected suggestions the integrity inquiry was an act of retribution against Bowen, with then-press secretary Tony Snow saying the council was "an independent investigative organization" that did not directly follow the White House's direction.

That investigation, triggered by a lengthy anonymous complaint filed by former staff members, focused on a number of fraud and abuse allegations, as well as descriptions of possible workplace violations, including sexual harassment. It included charges that Bowen's office overstated the amount of savings that it generated in order to justify a budget request and that money was wasted on the book project.

Attack a person on the basis of their strengths how Rovian.

I'll tell you how this should be reported.

But in the end it's really Nancy Pelosi's fault -- and it just proves that the whole invasion of Eye-Rack was the bestest thing ever!

Meanwhile, I'm sure every possible groper will consider these charges against Bowen proven...in the same way many of them have accused a woman of making up rape allegations against Halliburton/KBR.
Posted by Attaturk at 3:02 AM