How the news is filtered here...as opposed to the rest of the world:

Violence in Iraq is at its lowest levels since the first year of the American invasion, finally opening a window for reconciliation among rival sects, the second-ranking U.S. general said Sunday as Iraqi forces formally took control of security across half the country.

Lt. Gen. Ray Odierno, the man responsible for the ground campaign in Iraq, said that the first six months of 2007 were probably the most violent period since the U.S.-led invasion in 2003. The past six months, however, had seen some of the lowest levels of violence since the conflict began, Odierno said, attributing the change to an increase in both American troops and better-trained Iraqi forces.

Meanwhile, in the real world:

The full scale of the chaos left behind by British forces in Basra was revealed yesterday as the city's police chief described a province in the grip of well-armed militias strong enough to overpower security forces and brutal enough to behead women considered not sufficiently Islamic.

As British forces finally handed over security in Basra province, marking the end of 4½ years of control in southern Iraq, Major General Jalil Khalaf, the new police commander, said the occupation had left him with a situation close to mayhem. "They left me militia, they left me gangsters, and they left me all the troubles in the world," he said in an in an interview for Guardian Films and ITV. 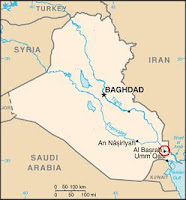 Basra is the southern most province in Iraq, it pretty much abuts the entirety of Kuwait (i.e. how the hell we get out of Iraq over land) and has most of the oil in Iraq and exclusive access to the sea.

In other words, Iraq is a lot more than Baghdad, and if the wrong group controls Basra, we're pretty much fucked...even more.
Posted by Attaturk at 4:28 AM