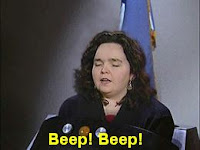 After shopping for casual wear, writing couplets that rhyme with "Mitt", and admiring the tattoo she made with a soldering iron that says "Kathryn Jean Romney", K-Lo doesn't have much time left for contemplating the result of her logic.

For example, yesterday, Nancy Pelosi stated that it is obvious "Republicans Love the War".

This leads to this bon mot:

Could respond to Pelosi by stating that Democrats "like" abortion. It might highlight how absurd a "leader" Nancy is.

I guess this would work, if a Democrat had knocked K-Lo up...but we all know the Democrats barely have the bravery to curb Bush from even bigger fuckups, none of them have the courage to take on "America's Slump Buster".
Posted by Attaturk at 6:48 AM