The Venn Diagram of those who took the "Weiner-weiner" pic as being legitimate with those who thought the Onion's article about Planned Parenthood's $8 billion Abortion-Dome was also legitimate.

I bet it's pretty overlapping.

And speaking of overlapping, I've done the kerning of the pic in question with the photo analysis I perfected over various junk-shots sent to Jenn Sterger (as opposed to those sent by BP) and it reveals the following "Breitbart" influences (it's all in the kerning people!) 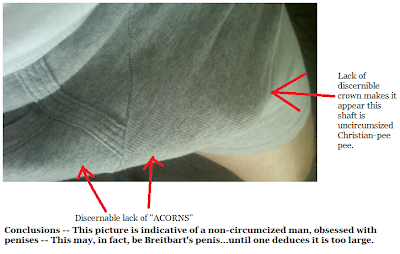 I would conclude that, in fact, this is a picture of (not very)Breitfart or one of his minions with a cucumber in his briefs.

shouldn't this be at RH afterdark?

Looks like little Jimmy O'Keefe has been playing with his pump again.

oh please. o'keefe ain't got a package like that.