It was disgusting when it happened after Mission Accomplished, it's disgusting now -- although at least so far I don't see the DNC pushing it at the 2012 convention like the GOP did Bush in 2004. 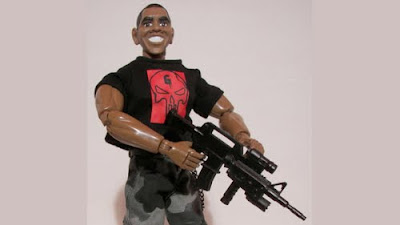 And so the run of horrible Osama bin Laden commemorative death merchandise begins in earnest, with this ridiculous doll depicting President Obama as a Navy SEAL. And from the grotesque grin to the massive assault rifle to the very idea of the doll itself, there’s something here to anger just about everyone. Except your seven-year-old. He’ll love it.

Please (please) please (pretty please)... Your Attaturkness, I urge you to stop being so fawning of Obama. I used to read this site a lot. I used to read it a lot and I liked it. I liked the Democratic Party. I liked Democrats. I don't like them as much now.

I saw thru Obama and his hopeychangeyness. I forgave you and many democrats for not being as good a judge of character as my wonderful self. But ferchrisakes(!) it's been 2.5 years and you still think the guy is so anti-cockroachy. Get a grip (then pass some of what you're smoking).

Real unemployment is at 19%

And there woul be no more lobbyists in the administration. Which excludes czars. Because you're too dumb to know what a czar is anyway. No lobbyists in the White House. But White House people can got to the coffee joint across the street. And lobbyists can go there too. And of course, they can bump into each other and do dirty deeds.

Please, your Attaturkness. You're a nice guy. The nice guys are moving/have moved away from all the hopeychanginess. Please join the nice guys. They rarely win, but when they do, they make sure to kick the other guy in the nuts. I'm not saying I want to kick you in the nuts. I'm a civil person.

Goodbye. Get over Obama.

EXCELLENT formula! I've began producing my very own washing soap just lately -- as well as like it -- however do not have the pretreatment squirt -- They are SIMPLE elements as well as I will provide this particular an attempt!!! Many thanks with regard to publishing this!