Take us at our word, not our bombing runs

According to the Guardian:

David Cameron has been told by UK intelligence that Muammar Gaddafi is increasingly paranoid, on the run, and hiding in hospitals by night with senior commanders in the regime unable to communicate with one another.

It's almost as if people are trying to kill him and his family by bombing their various places of residence.

But seriously, we're expected to believe that hiding in a hospital alone makes Gaddafi more crazy or malevolent when NATO's explanation for deploying Apache Helicopters is this?

The implicit threat in the use of the helicopters is that it will be easy to assassinate Gaddafi. But the French foreign minister, Alain Juppe, insisted that was not the plan. "We don't want to kill him," he said. "Because we are not killers."

Well, that's all simple enough logic is it not? 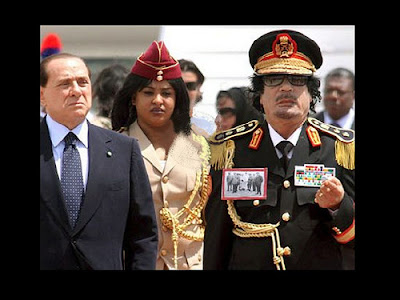 If only DSK were also in this pic!
(via Daveeza at flickr.com)


[cross-posted at Firedoglake]
Posted by Attaturk at 3:31 AM

"If only DSK were also in this pic!"