The Curse of the Prophet

We have often heard in the United States about the corrosive evils of socialism. But the criticism of socialism is funny coming from the patent results of capitalism in this world.

Attaturk isn't a socialist really, damn close, but not quite. But that doesn't mean that he doesn't believe that the world would be a better place today if another path had been taken early in the last century.

Thomas Frank, in "What Happened to Kansas" builds upon a topic that this blog has discussed in a different way in the last few weeks since the disappointment of the election.

Frank's major simple question is, how did the prairie states like Kansas for example, go from being the birthplace of the progressive movement into being among the most dependably conservative states in the nation?

It did not have to be this way.

One of the most prominent of these socialist was Frenchman Jean Jaures, the man pictured above.

Here is how the 20th Century and our present day would be vastly different if the Jaures's of the world had prevailed.

Jaures was a socialist, a socialist who believed in non-violent change to make the laborers of europe more economically free to profit from the hard work that comprised their day-to-day existence. A lover of mankind, rather than a loather of it. There was no cynicism in Jaures, only determination of the long-term hope for mankind.

Jaures believed that the economic interests of laborers were more important than national boundaries. A unified cause of their interest in economic progress over nationalistic war. It was an argument that in the first decade of the 20th century gained strength, no where more than Germany, where the workers were as active in the cause of economic justice as any.

But there were, of course, other forces at work in Europe in the summer of 1914 besides love of humanity and the cause of economic justice. The power of grudges and the power of self-worth, often terms "honor" were present.

It was found in the form of Gavrilo Pricip, a nineteen year old Bosnian, and believer in the concept of Serbian Nationalism exerting itself in the southern Austria-Hungarian empire in a greater Serbian nation.

Once again, one man can change the course of history.

Princip was a small young man, too small to be granted entry into the Serbian Army, but his actions would set forth events that would cause the meat grinder of war to take all the soldiers it could get no matter their size. Princip and others received training from a Serb nationalist group called "The Black Hand". On June 28, 1914, he took advantage of an opportunity to fire two shots into the body of the heir to Europe's most decrepit empire and his controversial non-noble spouse. Ironically, the assassinated man had great sympathy for the cause of the Serbs in the empire, but symbolism meant more than truth.

The First Two Victims of 100 million

So the first blow was struck for the "grudge", and then it expanded, Austria having little evidence that Serbia was involved in assassinating its heir (who the ancient Emperor did not much like anyway) other than indirectly inspiring the assassin was determined to exact revenge against one of the few European states it could, it supposed, crush. Sound familiar?

And then "Honor". Russia viewed itself as the "protector" of all slavic nations, like Serbia, so when Austria-Hungary mobilized to strike at Serbia, Russia was honor bound to mobilize against Austria-Hungary. Germany, which through the boorish behavior of the Kaiser had managed to have only Austria-Hungary as an ally in Europe was "honor bound" to mobilize against the Russians to protect Austria-Hungary. France, bound by treaty to Russia, then mobilized against Germany and much of its populace was bearing the "grudge" of the defeat at German hands nearly 50 years earlier. Britain, bound by no treaties, but it's word, joined its new ally France in preparing for war against Germany.

Many of the working classes now faced a choice between their logical economic interests, and the emotional call of nationalism. Again, sound familiar?

Bravely, against the tide, came Jean Jaures. In late July, he spoke at a socialist gathering in Brussels against the war, issuing the call for rationality, against the tragedy of war. He thundered in Brussels and then returned to Paris to continue to try to rally, as he had before, the working classes of Europe (those who would have to fight the war) to the cause of peace.

No World War One, no nine-million battle deaths.

No widespread civilian deaths based on diseases perpetuated by the suffering of the "Great War", another ten million deaths averted.

No Russian Revolution, sparing us many events to come, and the Russians another ten million deaths incurred between 1917 and 1922.

A Europe of less bombastic and more confined Constitutional Monarchs; or their gradual elimination rather than violent overthrow. In retrospect, even Nicolas Romanov probably would think that was a better result than being shot down with his family in the basement of the Impatiev House in Ekaterinburg. No Russian Revolution means no Lenin, no Stalin, no purges, no mass starvations, no June 22, 1941 (see below) and ultimately no Cold War.

No First World War means effectively no Second World War, especially in Europe. The marginalization of the Kaiser, but the growth of steady workers unions makes the "grudge" politics of Hitler unnecessary. In fact, Hitler remains an obscure failure of one form or another. No need for a Hitler means no Nazi Party, an ultimately no Holocaust.

No Holocaust means it likely that the Zionist movement remains simply that, it means any form of Balfour Plan leads to a more accommodationist relationship between Jews and Muslims in the region. It means no fifty years of instability in the Middle East, it means no Six Day War, ultimately, it likely means no 9/11.

No World Wars means no cold war, the vast economic power of the United States is made to benefit society and education to such an extent it propels the World to a new age of peace and prosperity. Trillions of dollars building bombers, are instead used to educate you, train you, provide you with a social safety net, health insurance.

No World War means no need for the development of nuclear weapons.

Imagine the possibilities -- would other things have arisen, sure, but could they really have been worse than what happened? 100 Million Dead, Trillions spent on armaments, perpetual debts, etc. Seriously, how could we collectively, have fucked up any worse short of starting a nuclear war?

Jean Jaures was arguing for these possibilities over war, over corporatism, over nationalism, over hunger, over disease, over ignorance.

But it was not to be.

It the height of the struggle, the voices opposing the war were centralising around Jaures.

But there were nationalist workers, and their zeal was up against that of the determined pacifist. Their embodiment was Raoul Villain. A month after Princip assassinated Franz Ferdinand, on July 31, 1914, Villain saw Juaues in a coffee shop with a small number of associates. Villain fired shots through the window, and the most persuasive voice for peace was another early victim of the Great War.

Gunned down, and now, but for a few virtually forgotten by the tide of war he so feared, and worked so hard to prevent. Gunned down and proven right, and pretty much forgotten in the bargain, such is the curse of the prophet.

When conservatives in this country start bitching and moaning about how fucked up socialism is (or the French for that matter), remind them of July 31, 1914. 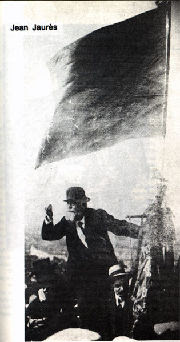 We should take from the past its fires and not its ashes.
-- Jean Jaures

I wonder to sometimes what the world would of been like if the masses of Europe said no more war.