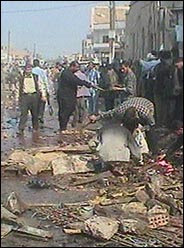 Is this the image of success?

ILLA, Iraq, Feb. 28 - A suicide bomber steered a sedan full of explosives into a thick crowd of Iraqi police and army recruits here this morning, killing at least 122, in the deadliest single bombing since the American invasion nearly two years ago.

The bombing in Hilla, 60 miles south of Baghdad, tore into a crowd of several hundred recruits who were waiting for mandatory checkups at a medical clinic in the city center, across from the mayor's office and a large outdoor market.

I don't know about all of you but I am tired of constantly asking how many have to die until this bloodthirsty worthless war ends. How are we doing on the impeachment process?
Posted by DeDurkheim at 3:32 PM