But "SHE" touched her 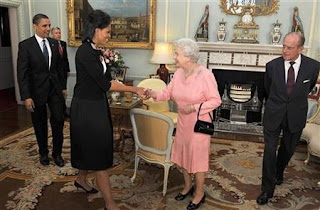 Oh dear, it appears that once again, the explosions of right-wing memeoradumville are wrong again.

When Michelle Obama made a private visit to the British capital last week with daughters, Malia, 10, and Sasha, 8, they were given a private three-hour tour of Buckingham Palace, including a meeting with the queen.

"There clearly is a personal warmth between the two of them," a royal source told Reuters on Sunday, referring to Michelle Obama, 45, and the 83-year-old monarch.

"Clearly the queen, the Duke of Edinburgh and the Obamas got on very well at the G20 summit and mention was made then that they should keep in touch and they have done."

According to the sources, the queen and Michelle Obama have exchanged letters and spoken by telephone since that first meeting. The visit last Wednesday was organized as a treat for Sasha, who turned 8 that day.

Despite their age difference, the two women are said to share a number of interests, including the countryside, gardening and clothes.

"It's a positive thing for relations between the two countries that the royal family and the president's family get along so well," the sources said.

I guess they'll have to put away the hajib of "Secret Muslim" and que up the cry that the Obamas are "Secret Monarchists".