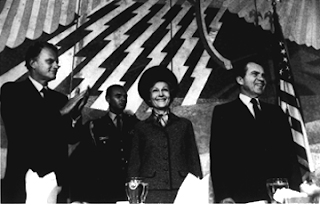 There's a reason Billy Graham "counseled" President after President, from Eisenhower to Clinton (or even Bush II) before he passed the kiss-ass baton to his son, the odious Franklin.
Because he let the President seem "extree" Christiany and they all like that for the most part.

But he also got invited because he was always there to buck them up and tell 'em what they wanted to hear.

Every President knew what Graham was there for, and Graham always knew it too. A little mutual ass-kissing for their mutual benefit. The President got a free pass and Graham got to be the Protestant Pope of America.

And there's no more offensive and blatent example than his coddling of Nixon's anti-semitism.

A 1973 conversation between President Nixon and evangelist Billy Graham about Jews, laden with critical references including a Biblical verse on the "synagogue of Satan," has put the aging, frail Graham back in unwelcome headlines...

... An earlier release of tapes in 2002 shocked fans of Graham, who is heard agreeing with Nixon as the president rails against liberal Jews' political activism and media clout. Graham tells Nixon how Jews befriend him but adds, "They don't know how I really feel about what they're doing to this country."

And, as ever, Abe Foxman of the ADL is there with a far too late, far too ineffective statement of condemnation of conservative anti-semitism.

Anti-Defamation League director Abraham Foxman on Wednesday blasted both Nixon and Graham, saying that, "while never expressing these views in public, Rev. Graham unabashedly held forth with the president with age-old classical anti-Semitic canards."

Foxman has spent the last two decades ignoring GOP anti-semitism because evangelical right-wingers are pro-Israel -- in order to facilitate the rapture when, the point being bringing about the murder of all Jews (and other non-Christians) when Jeebus comes back packing heat to kill all those who don't worship him -- out of his gracious love.

I didn't say it made any sense, it's religion. But it serves the ADL's and the Evangelical Right's short-term interest (well long-term really because the rapture isn't happening) so they'll ignore the ultimate message as long as they can (that would be forever).

Luv-a-lee thing enabling isn't it?
Posted by Attaturk at 4:58 AM