The Tighty Whities of Man 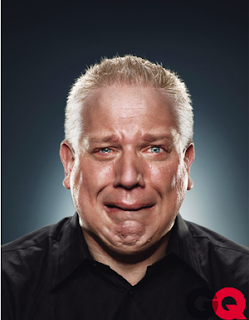 Last week I put up a post mocking Glenn Beck (redundant I know) claiming that his "book", if that's what you want to call it, is dedicated to and inspired by Thomas Paine -- and Beck obviously thinks he is the modern day Paine.

Um, bullshit, and here's a few Paine quotes to demonstrate it:

Independence is my happiness, and I view things as they are, without regard to place or person; my country is the world, and my religion is to do good.

-- Oh my God, Paine not only doesn't hate Mexicans or Muslims, he's an internationalist and a one-worlder!

-- Thomas Paine, NOT a strict constructionist -- why'd he'd even be for regulating handguns.

When an objection cannot be made formidable, there is some policy in trying to make it frightful; and to substitute the yell and the war-whoop, in the place of reason, argument and good order.

-- Thomas Paine, he wouldn't like Beck's heroes George Bush or John McCain and would positively loathe most all of FoxNews.

When I contemplate the natural dignity of man; when I feel (for Nature has not been kind enough to me to blunt my feelings) for the honor and happiness of its character, I become irritated at the attempt to govern mankind by force and fraud, as if they were all knaves and fools, and can scarcely avoid disgust at those who are thus imposed upon.

I believe in the equality of man; and I believe that religious duties consist in doing justice, loving mercy, and endeavoring to make our fellow-creatures happy.

The countries the most famous and the most respected of antiquity are those which distinguished themselves by promoting and patronizing science, and on the contrary those which neglected or discouraged it are universally denominated rude and barbarous.

-- Have I mentioned how much he'd hate the modern GOP, FoxNews & Glenn Beck?

All national institutions of churches, whether Jewish, Christian or Turkish, appear to me no other than human inventions, set up to terrify and enslave mankind, and monopolize power and profit.

-- Oh yes, but he'd think the Mormons who came after him just peachy, right Glenn?

It is from the Bible that man has learned cruelty, rapine and murder; for the belief of a cruel God makes a cruel man.

-- If Glenn Beck had the foggiest idea who Thomas Paine was, he'd be crying his eyes out -- again.

What is it the New Testament teaches us? To believe that the Almighty committed debauchery with a woman engaged to be married; and the belief of this debauchery is called faith.

-- Can you imagine how much Thomas Paine would hate the modern GOP's base?

Yet this is trash that the Church imposes upon the world as the Word of God; this is the collection of lies and contradictions called the Holy Bible! this is the rubbish called Revealed Religion!

-- I don't think Thomas Paine would be in favor of teaching "Intelligent Design".