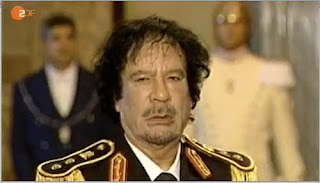 Gadhafi as Gene Simons as Sgt. Pepper via Hans and Carolyn at flickr.com


This must have been a regular Legion of Doom get together:

Moammar Gadhafi’s regime controls $32 billion in liquid assets around the world, including hundreds of millions of dollars invested in U.S. banks, according to a confidential cable written by the U.S. ambassador to Libya last year. The leaked diplomatic message was distributed through WikiLeaks.

The same cable reported that Libya had been approached by two men accused of running huge Ponzi schemes, Bernard Madoff and Allen Stanford, but had resisted offers from them to invest Libyan funds with them.

So he had one up on Citibank.

Meanwhile, in America we give the banksters billions (*shakes fist* CITIBANK!), cut taxes for them - not for you - and bust unions and our elected officials will always be willing to talk to any rich crank any time. So we're obviously awesome.
Posted by Attaturk at 3:31 AM

In the photo, he looks a little like Josef Fritzl.

If he does lose his job, Kadaffy might be sought to buy Citibank or something and run them more smartly.
vox